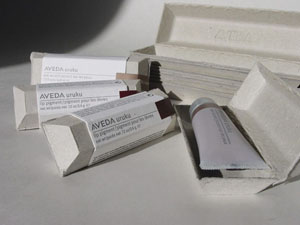 All cosmetic companies are trying to help make their customers look and feel good by using their beauty products. What separates Aveda from the others, aside from the quality of its products, is that the company tries hard to make the earth look and feel good as well.

Other companies certainly put effort into making their products environmentally friendly. For Aveda, though, which develops, manufactures and markets an extensive collection of plant-based hair care, skin care, makeup, Pure-Fume™ and lifestyle products, environmental concern is not merely a goal, it is an obsession that is woven inextricably into the company’s corporate culture.

Consider Aveda’s mission statement, attributed to company founder Horst M. Rechelbacher. Concern for the environment is the first thing mentioned: “Our mission at Aveda is to care for the world we live in, from the products we make to the ways in which we give back to society. At Aveda we strive to set an example for environmental leadership and responsibility, not just in the world of beauty but around the world.”

These are lofty goals and intentions. Aveda, though, which sells its products in more than 8,000 salons, spas and environmental lifestyle stores around the world, is willing to put its money where its mouth is – quite literally. Not long ago when Aveda began to develop the design for its Uruku Lipstick line, the company decided to create a permanent accessory case that would allow the user to purchase a new cartridge and simply drop it into the accessory case. It would essentially be a refillable lipstick that would help Aveda reduce the amount of material in its lipstick packaging; the only piece that would need to be replaced is the actual lipstick cartridge.

This might have been a radical manufacturing concept for other companies, but not Aveda. The 26-year-old company had already solidified its reputation as a cosmetic-industry pioneer when it created a reusable compact, in which different makeup shades, in the form of “tablets,” could be inserted. This eliminated the need for customers to purchase a new compact, thus reducing waste. The transition to a reusable lipstick package was, therefore, far from a quantum leap.

“The objective was to create an environmentally friendly package,” said John Delfausse, vice president of packaging at Aveda. “That is priority number one in any packaging effort. Cost and design are very close behind.”

Or at least “half” accomplished. There was still the matter of secondary packaging. Anything that Aveda sells, in fact, must be placed in secondary packaging that contains all pertinent legal information and product instructions. Lipstick would ordinarily be placed into a folding carton constructed with a level of post-consumer recycled material. Up until this point, the highest level of post-consumer content that Aveda had been able to achieve while still allowing for the presentation of the high-quality graphics that Aveda requires was 55%.

Not bad, but not enough, according to Delfausse.

“With every package we create, whether primary or secondary, our goal is to try and achieve 100% post-consumer content,” he said. “Obviously, it’s not always possible, but that is the standard we are constantly striving for.”

Following its intuition for innovation, Aveda had examined the use of a molded pulp clamshell as a secondary package. The company had previously tried to produce a similar design for secondary packaging for its fragrances, but tooling costs and design challenges could not be overcome. Undaunted in its quest and convinced that a cost-effective, molded pulp clamshell could be created, Aveda conducted a search for companies that worked with molded pulp. While this search did unearth suppliers that worked with the designated materials, Aveda discovered that most required too high a tooling investment that led to a less finished, industrial look – at too expensive a part price.
Just when a suitable molded pulp clamshell appeared to be unachievable, Aveda located Molded Fiber Technology (MFT), an innovative designer and custom converter of foam, plastics and natural fiber products. UFP’s Engineered Packaging division seemed to have an answer to the problem.

“UFP was already making a product we thought we could work with,” said Delfausse. “The clamshell that helped us get the idea for the design was actually a filter for a soldering gun. The small molded fiber part was inserted into a corrugated sleeve that attached to the gun. Using this product as a foundation, we saw a design that could be modified to become our lipstick package.”

Using that clamshell design, UFP built a molded pulp clamshell that Aveda could begin evaluating. The prototype had a very “cosmetic” look to it, with a unique, geometric design. Everyone at Aveda was excited about the design, not only from an aesthetic and functional perspective but also because of the groundbreaking nature of the project: a molded pulp design had never before been used for a secondary package in the cosmetic industry.

After Aveda saw the initial concept, they sent the actual primary part – the lipstick case - to UFP. Having the case in hand allowed UFP to further refine the secondary package to accommodate the product.
“We visited UFP’s tooling and design facility and discussed the project in more detail,” said Delfausse. “UFP worked very closely with us in the prototyping phase. They engineered their drawings to mold the clamshell to the proper size. We then approved the drawing, and UFP began to produce the prototype parts. From the prototype we subsequently went into production.

“UFP’s mission would not only be to mold the part but also to press it and die-cut it,” he continued. “As it turned out, they were capable of putting a turnkey process together that would meet our company’s tooling target and price target.”

A manufacturing obstacle or two is certainly not unexpected with a product this innovative. What’s important are the lengths to which the manufacturer will go to overcome the obstacles.
“During the development phase, some of the clamshells were cracking during the scoring process that produced the fold,” Delfausse said. “UFP experimented with a variety of different solutions to correct the issue.

“What’s more, in terms of cost, UFP also reduced its minimum runs to work with us and make the process more cost-effective.” Once Aveda was satisfied with the clamshell, the company created a sleeve that would surround the clamshell and hold everything in place.  “This was so radically different than anything that had been done before,” stated Delfausse. “UFP helped us turn out a truly unique secondary cosmetic package. And the truth is, it was actually a fun process.”

The uniqueness of the product did not go unnoticed in the industry. In fact, the entire Uruku Lipstick package – both primary and secondary - was the winner of the cosmetics category at the HBA 2003 International Package Design Awards. The success of the package has had a positive ripple effect within the company. Beginning with the lipstick package, Aveda has created five different clamshell designs, which hold a number of other cosmetic products, including eye pencils.

“Our environmental mission has encouraged us to look for innovative materials and packaging that we wouldn’t normally think about and create unique designs that we might never have imagined. But just having that vision is not enough. It’s imperative that as a company, we find partners who can assist us in executing that vision. In this case, UFP was able to help us do it.”

Maybe the Uruku Lipstick package won’t solve world hunger and bring about peace on earth. But in some small way, it is helping our planet put on its best face.